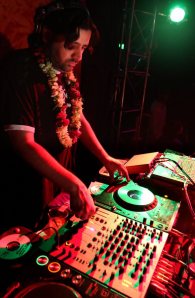 Amar is amongst a handful of local DJs whose taste cuts a path through an abundance of musical selections and leads dancefloors into a hypnotic sway like snakes before the charmer. In this instance the muse is a masala that brews sounds from the Middle East and Balkans with rhythms of the Asian underground and electric Brazilian vibes. Whether its breaks, bhangra, house, drum & bass or downtempo the global nature of Amar’s sets bridges a multi-culti span from the world to the Bay Area. 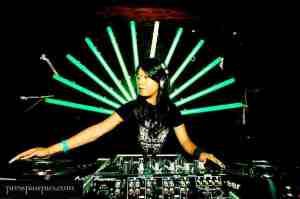 As a DJ performer in San Francisco, the North American capital of electronic dance music, how does DV stand out? Along with a highly-acclaimed ability for solid track selection, true individuality happens here as a result of a musical risk. With the crossfader as her primary canvas and a signature brand of aggressive intent, she performs a sound all her own – an energetically urban soundscape of breakbeat, infused with audible hints of Nu Skool, Big Beat, Chunky Electro, Tech-Funk, Filtered Disco, World Beats, Dubstep, Glitch-Hop, and IDM.
(Bio taken from Opulenttemple.org) 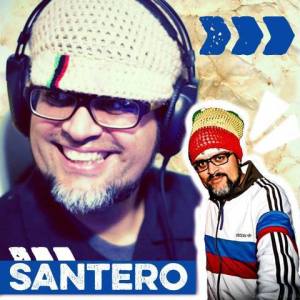 Santero comes from a long family tradition of Latin musicians and Sonidero sound system deejays. He was raised in the mountains, jungles and Atlantic coasts of Central America where he travelled extensively from Guatemala to Panama performing with his father’s Salsa & Cumbia bands. He came to the United States at a young age as a refugee escaping the political upheaval that was tearing Central America apart in the late 70’s and 80’s.

Once in the US, Santero immediately started the musical street hustle that would later define his style and sound. From the ghettos of New York and New Orleans to the barrios of San Francisco and Los Angeles, Santero refined his sonic palette and delivery by performing relentlessly in nightclubs, warehouses and on street corners. Drawing from such diverse musical influences as Reggae, Jazz, Punk, Funk and Hip-Hop, Santero incorporated his traditional Latin upbringing with these western music styles and developed his own brand of international fusion beats.

Eventually his constant touring and performing led him back to his roots in Latin America. After an extended stint of travelling and performing in Central America and the Caribbean, he found himself in Habana, Cuba. This would be a crucial turning point in his musical trajectory. While in Cuba, Santero was initiated as a priest in the Yoruba/Santeria religion. He was crowned as an avatar to the African deity Obatala, spirit of peace and light. From that point onwards, Santero dedicated his musical energy towards exposing a new generation of Latinos and Latin music lovers to the spiritual essence of the Pan-African Diaspora through club friendly rhythms and rhymes.

Santero now resides in Oakland, CA where he runs one of the busiest night clubs in the city. He splits his time working as a recording artist, producer, deejay and radio host. In 2005 he was named Best New Artist by Batanga magazine for his first album and made Remezcla’s 2008 Top Ten list.
Santero’s sophomore release El Hijo de Obatala has garnered critical acclaim, having been featured on NPR’s All Things Considered & Latino USA. Santero’s sophomore effort made several critics’ top 10 lists for best album of 2009 in the Village Voice, SF Weekly & other publications. Santero was nominated for a 2009 SF Weekly Music Award and was featured on many prominent music blogs. He is constantly touring and performing and exploring ways to fulfill his musical destiny.

Help us Spread the Word: 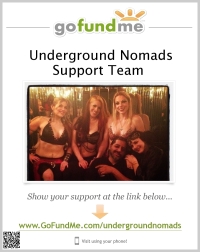