Olu is a diverse performer who works in venues ranging from private parties, corporate events, night club promotions and dance theater.  She’s had the pleasure of performing for a dynamic array of audiences and has collaborated with several well noted artists along the way. With a style all her own…….personality along with a solid background in American Cabaret and Tribal Fusion are infused with the never ending inspirations from day to day life. As an improvisational dancer, Olu goes where the music, theme and vibe take her.
Olu is known for her musicality, earthy presence and skill in using props such as zills, veil and sword.  She is also known for her technique, snake-like undulations, passion and grounded nature. This eclectic balance of mediums allow Olu the ability to perform for a wide range of audiences.
Olu can be seen in public performances in and around th LA area as a Soloist and also as a member of Lumina Bellydace Company and Elysium Dance Theatre.  www.olubellydance.net

Resident Performer info. will be added to the site this summer on our new DANCER page, which is in progress.

DJ MUNDI is an unusual kind of DJ. In latin, mundi means ‘of the world’ and indeed his soundcloud page features an extremely wide range of music including Zimbabwean mbira, Afro-house, Colombian cumbia, Indian/UK bhangra, Egyptian shaabi, Reggae Dancehall from around the world and more.. Based in Oakland California, his eclectic mixes and live sets have gained respect from far and wide and have recently been featured in multiple online magazines and blogs such as Afropop Worldwide, Generation Bass and Global Ghetto.

He credits the public library across the street from where he grew up as his greatest musical influence because it was there, at a young age that Mundi began listening to, reading about and collecting music from across the globe. Currently he’s working on things as varied as “a mix of new African music from all around the continent, South African house, Angolan kuduro, Ghanian azonto, Ivorian coupe decal” and a “General Levy dancehall-rock remix with arabic strings” among them. Follow him on soundcloud and facebook to keep up with the latest.

As you may have noticed, we are bringing in new DJs and Live acts to the Underground Nomads mix of musical talent. We are also expanding our dance performance lineups with occasional Extra-Special big weeks. 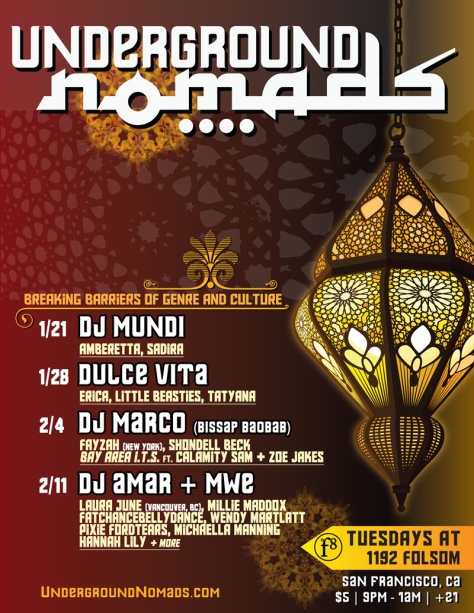 Keep posted here and check in on our Facebook page for weekly updates.

Upcoming  next Tuesday, we have DJ Mundi, for his first DJ set at Underground Nomads. More info will be posted soon.

We thank you for your support.